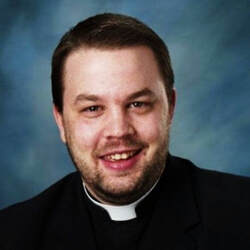 ​Fr. Harrison Ayre was born in Pitt Meadows, BC, son of two loving parents and has two younger siblings. He moved to Victoria to attend UVic after high school and began his long journey of post-secondary education in studying computer science. While at University, he had a profound conversion and began to practice his Catholic faith. He eventually graduated from UVic with a degree in Philosophy with a minor in Medieval Studies.

After graduation, he worked at St Andrew’s Cathedral, first as the office assistant, then as office manager. During this time he began to take seriously the call to priesthood. After attending a seminar in Poland on John Paul II’s theology and philosophy of the human person, he decided he had to go to seminary, and entered St Joseph’s seminary in 2008. While in seminary, he went on a mission year and spent a year working with Mother Theresa’s Missionaries of Charity in Gallup, NM, and San Francisco. He was ordained a Deacon in 2013 and a priest on February 7th, 2015. He has served at St Patrick’s Parish, St Andrew’s Cathedral, Holy Family/Notre Dame, and now as pastor of St Peter’s here in Nanaimo.

He also completed his Master’s of Theology (MTh) from Newman Theological College in 2018 and is now a PhD Candidate in Systematic Theology at the Maryvale Institute in Birmingham, UK. His research is around Joseph Ratzinger’s theology of the human person and how  we can understand that through a sacramental lens.

Fr. Harrison loves the Church and the life that comes from being in her. In his spare time he loves to read and write. He absolutely loves reading philosophy and theology. He has written many articles for SimplyCatholic.com and hosts a weekly podcast with his friend, Fr Anthony Sciarappa, called Clerically Speaking. He has a love for good Belgian and craft beer, books, and culturally interesting movies and TV shows. Some of his favourite saints are St Augustine, St Thomas Aquinas, Sts John and Paul (apostles), and St Theresa of Calcutta.